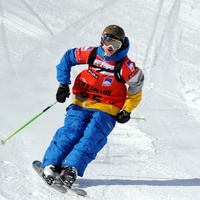 Candide Thovex net worth: Candide Thovex is a French professional skier, entrepreneur, and filmmaker who has a net worth of $3 million. Candide Thovex was born in Annecy, France in May 1982. Thovex is known for his approach to freestyle skiing. He successfully jumped Chad's Gap in Alta, Utah which was a jump of 120 feet. Thovex makes point of view videos that have gone viral and are viewed by millions. At just two years old he learn to ski in the French Alps and at the age of tour he started doing ski jumps. At 14 Thovex won the French National Junior Championships. He signed with Quiksilver in 1997 and first competed in the Winter X Games in 1999. Thovex won the X Games Vermont Big Air and the Gravity Games Big Air in 2000. He finished 1st at the X Games in Superpipe in 2003 and 1st in slopestyle in 2007. He has appeared in the films 13, Propaganda, Royalty, Focused, the Rastafaride series, Special Delivery, Further, Anomaly, War, Lost and Found, Mind the Gap, Strike, Tangerine Dream, the Candide Kamera series, and more.