What is Caeleb Dressel's net worth?

Caeleb Dressel is an American swimmer whose specialties include the butterfly and freestyle sprints. Caeleb has a net worth of $5 million. He has won multiple medals at the World Aquatics Championships, including a record eight at the 2019 Championships in Gwangju, South Korea. Additionally, Dressel has won numerous Olympic medals, and holds the world records in such events as the 50-meter freestyle and the 100-meter butterfly.

Caeleb Dressel was born in 1996 in Green Cove Springs, Florida to parents Christina and Michael. He has three siblings, Tyler, Sherridon, and Kaitlyn, all of whom are also competitive swimmers. As a teen, Dressel went to Clay High School, but swam with the Bolles School Sharks in Jacksonville. At the age of 15, Dressel was the youngest male swimmer to compete at the 2012 United States Olympic Trials. He placed 145th in the 50-meter freestyle, and tied for 152nd in the 100-meter freestyle. Dressel's greatest success yet came the next year, when he competed at the FINA World Junior Swimming Championships in Dubai. There, he won six medals, including gold in the 100-meter freestyle. Shortly after, at the Speedo Winter Junior National Championships, he became the youngest swimmer ever to break the 19-second barrier in the 50-yard freestyle.

Dressel went on to attend the University of Florida, where he swam collegiately. In his freshman year, he won the 2015 NCAA title in the 50-yard freestyle. The same year, he won titles in the 50-meter and 100-meter freestyles at the senior National Championships. Dressel followed this with a stellar showing at the 2016 Men's NCAA Division I Championships, where he broke both the American and US Open records in the 50-yard and 100-yard freestyles.

Dressel continued his success in 2016 with his first Olympic appearance at the Games in Rio de Janeiro. He swam the lead-off leg in the 4×100-meter freestyle relay as part of a team including Michael Phelps, Nathan Adrian, and Ryan Held. The team came in first with a time of 3:09.92, giving Dressel his first Olympic gold medal. He won another gold shortly after in the 4×100-meter medley relay. Meanwhile, Dressel came in sixth in the 100-meter freestyle.

At the NCAA Division 1 Championships in 2017, Dressel once again broke both the American and US Open records in the 100-yard freestyle; additionally, he broke the record in the 100-yard butterfly. More triumphs came at the World Aquatics Championships in Budapest, where Dressel won seven gold medals and set a number of American records. His records were posted in the 50-meter butterfly, the 4×100-meter mixed medley relay, the 100-meter freestyle, the 50-meter freestyle, and the 4×100-meter mixed freestyle relay, among other events. After Michael Phelps, Dressel became only the second swimmer ever to win seven gold medals at a single World Championships.

Dressel took down more records at the NCAA Division I Men's Swimming and Diving Championships in 2018. He thrice broke the American and US Open records in the 50-yard freestyle, and also broke the record in the 100-yard butterfly. As a result, Dressel won CSCAA Swimmer of the Meet honors for the third consecutive year. 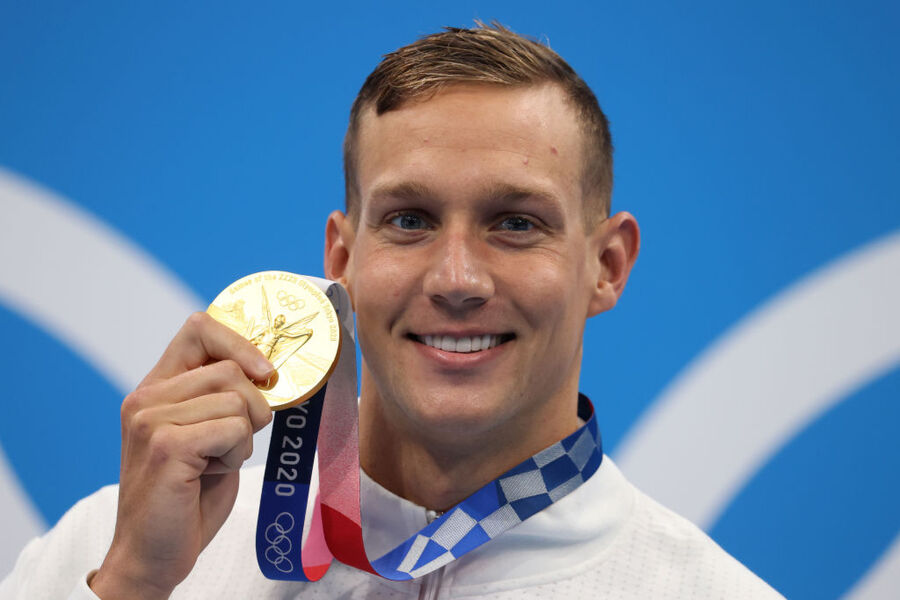 Dressel represented the Cali Condors as part of the inaugural 2019 International Swimming League. In the Las Vegas competition, he won all three of his matches and was also named MVP for each of them. In 2020 with the Condors, Dressel broke four world records in the 100-meter butterfly and the 50-meter freestyle. Moreover, he became the first person to swim the 100-meter butterfly in under 48 seconds.

At the 2020 Summer Olympics in Tokyo, held in 2021 due to COVID, Dressel had one of the most historic meets of his career. On the third day of competition, he won a gold medal as part of the men's 4×100-meter freestyle relay team, which included Bowe Becker, Blake Pieroni, and Zach Apple. Next, he won his first individual Olympic gold in the 100-meter freestyle, setting a new Olympic record with a time of 47.02. On day eight, Dressel won the 100-meter butterfly with a world-record time of 49.45. He subsequently won the 50-meter freestyle with an Olympic-record time of 21.07. Finally, Dressel and his teammates Ryan Murphy, Michael Andrew, and Zach Apple won the 4×100-meter medley relay, setting a new world record of 3:26.78. With his five gold medals in Tokyo, Dressel became only the fifth American in history to win that many at a single Olympic Games.

In 2013, Dressel began dating Meghan Amelia Haila, who trained with him while in high school. The couple got engaged in 2019, and married in early 2021.

Dressel is an Evangelical Christian, having grown into his faith while attending college. His upper-arm tattoo of a large eagle is inspired by the Bible verse Isaiah 40:31. 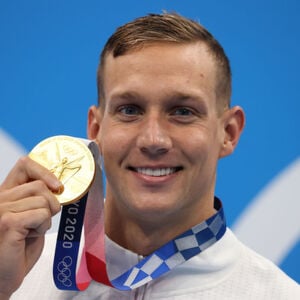