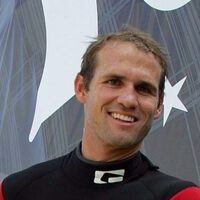 CJ Hobgood net worth: CJ Hobgood is an American professional surfer who has a net worth of $1 million. CJ Hobgood was born in Melbourne, Florida in July 1979. He is a World Surf League World Championships Surfer. CJ and his twin brother Damien both compete in top professional surfing events across the globe. CJ entered his first surfing contest in 1989 and became the model of the National Scholastic Surfing Association logo in 1998. He has four ASP World Tour Wins: The Quiksilver Pro France in 2000, The Billabong Pro Tahiti in 2004, the Quiksilver Pro Japan in 2004, and the Billabong Pro Mundaka in 2008. Hobgood has been sponsored by Globe, DaKine, To Write Love On Her Arms, Smith eyewear, Vestal Watches, FCS fins, and Quiet Flight Surfboards. In 1999 he was named the ASP World Tour Rookie of the Year. He is a part of the Christian surfers movement.