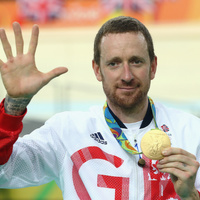 Bradley Wiggins net worth: Bradley Wiggins is a British professional road and track racing cyclist who has a net worth of $5 million dollars. Born in Ghent, Belgium, Bradley Wiggins began racing bikes when he was in elementary school, and won a Bronze medal at the 2000 Summer Olympics in team pursuit. Four years later, he would make history, becoming the first British athlete to win four medals at a single Olympics in 40 years, when he won a Gold medal, a Silver medal, and a Bronze medal. After spending much of his career focusing on individual pursuit and team pursuit racing, he has begun to focus more of his energy on road racing in recent years. The transition has been slightly rocky, but he has made appreciable headway since 2010. He has won 1 stage at the Giro d'Italia, 2 stages at the Tour de France, stage races at the Criterum de Dauphine, and Tour de Romandie, and he was National Road Race Champion in 2011. In 2016 he won a Gold medal at the Olympics in Brazil.