Blanka Vlašić Net Worth: Blanka Vlašić is a Croatian athlete who has a net worth of $2 million. Blanka Vlašić was born November 8, 1983 in Split, SFR Yugoslavia. Her specialty is the high jump. The daughter of Croatian decathlon record-holder Joško Vlašić, she was a talented junior athlete and attended her first Olympic Games in 2000 (Sydney, Australia) at the age of sixteen.

She won the World Junior Championship in Athletics in both 2000 and 2002. Vlašić broke her national record in 2004 and also won her first world senior medal at the World Indoor Championships that same year. She spent the 2005 season recuperating from surgery when she was diagnosed with a hyperthyroid condition. She returned in 2006 and took the silver at the World Indoor Championship. Vlašić came back strong in 2007 when she won at the 2007 World Championships and went on to become the indoor world champion in 2008. Her winning streak came to an end with a narrow loss at the Beijing Olympics, where she took silver. She became World Champion for a second time in 2009. She ranks second in the all-time high jump rankings, behind Stefka Kostadinova. She also won the IAAF World Athlete of the Year 2010 and European Athlete of the Year Trophy (2007,2010). Vlašić had an operation on her left Achilles tendon in January 2012. The operation went well, but an infection developed and she had to be re-operated on in April. A slow healing process delayed her preparations for the London Olympics and she had to withdraw. Vlašić did not compete in any other event of the season. In 2014, Vlašić finished 6th at the World Indoor Championships. 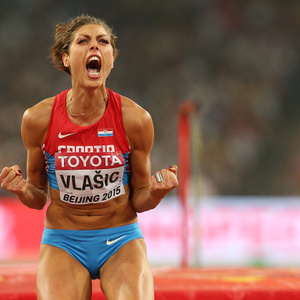