Ashton Eaton net worth: Ashton Eaton is an American professional athlete and Olympian who has a net worth of $8 million. Ashton Eaton is widely considered the best athlete in the world thanks to his dominance in the decathlon at the Olympics and various other sports competition. Eaton was born on January 21, 1988 in Portland.

Oregon. His father and grandfather both played football in college. His mother was both a dancer and an athlete. As a child, Ashton competed in running, soccer, wrestling, basketball and football. He briefly entertained the idea of attending a Division III college to play football, but instead opted to attend the University of Oregon. At Oregon he focused his energies on the decathlon. He won dozens of awards in college including the decathlon at the 2008 NCAA Men's Outdoor Track and Field Championship. As an Olympian he won a gold at the 2012 London games and the 2016 Rio games. He also has two World Championship gold medals and three World Indoor Championships gold medals. In July 2013, Eaton married his Oregon teammate Brianne Theisen, who herself competes at the Olympics for her home country of Canada. During the 2016 Olympics, Ashton Eaton was one of the most commercially-endorsed athletes at the game. 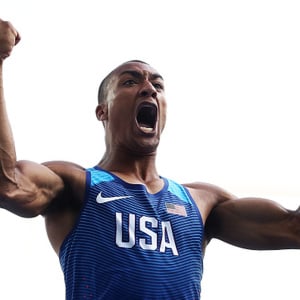