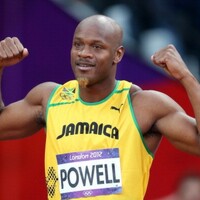 Asafa Powell is a Jamaican sprinter who has a net worth of $6.5 million. Asafa Powell has earned his net worth as a sprinter who specializes in the 100 metres, and held the 100m world record between June 2005 and May 2008, with times of 9.77 and 9.74 seconds. Powell is well-known for his ability to consistently break the 10-second barrier in competition, with his overall personal best of 9.72 seconds which is the fourth fastest time in the history of the event. He was born in Spanish Town, Jamaica on November 23, 1982; he is the youngest of six sons born to two ministers. Due to suffering from pre-race anxiety, he has underperformed his abilities in some major races. Powell has broken the ten-second barrier legally more times than anyone else with 80 times in total, as of July 2011. Powell was a competitor in both the 2004 Athens Olympics and the 2008 Beijing Olympics, unfortunately he only finished fifth both times. However, with the Jamaican team he won a gold medal and set the world and Olympic record in the 4 x 100 metres relay in Beijing. He won a bronze medal in the 100m and a silver medal in the 4 x 100 m relay at the Osaka World Championships in 2007. In addition he also won two gold medals and one silver medal at the Commonwealth Games. Then he ran 9.84 seconds in the World Athletics Championships from Berlin, Germany in August 2009. Some more accomplishments by Powell include; a bronze medal for the 100m and a gold medal in relay at the 2009 World Championships, he is also a five time winner at the IAAF World Athletics Final and Powell is the 100 m record holder for the event. Powell is a deeply religious man and known as an avid car enthusiast.