Amanda Beard net worth: Amanda Beard is an American swimmer and a seven-time Olympic medalist who has a net worth of $4 million. She is a former world record holder in the 200-meter breaststroke, and earned the  "American Swimmer of the Year" Award twice. Throughout her career, she has won a total of 21 medals in international swimming competition including five gold medals, thirteen silver medals, and three bronze medals. She made her first Olympic appearance at the 1996 Atlanta Olympic Games at the age of 14, and was the second-youngest Olympic medalist in American swimming history. Outside of her Olympic career, she has also had a successful career in modeling. She has appeared in FHM, the 2006 Sports Illustrated Swimsuit Edition, and Playboy. She is also a spokeswoman for Defenders of Wildlife, and in advertisements for GoDaddy and PETA's anti-fur campaign. In 2008, she alsojoined Fox Network's popular sports talk show, The Best Damn Sports Show Period as a correspondent covering major sporting events. After achieving an athletic scholarship to the University of Arizona, and while competing in Olympic trials, she began to struggle with bulimia nervosa. Stress from wearing a swimsuit under a microscope as well as seeing the photo-shopping process of her ads caused Beard to desire having a body which matched that in her photos. In 2012, she released an autobiography, In the Water They Can't See You Cry: A Memoir, where she discusses her personal struggles, her parent's divorce, and working through the pressures of being a perfectionist. Beard is a vegetarian and is married to photographer, Sacha Brown and the couple have two children, a boy, Blaise and a girl, Doone. Recently, Beard and her family appeared on the hit reality series, Celebrity Wife Swap where they swapped lives with Heidi Montag and Spencer Pratt. 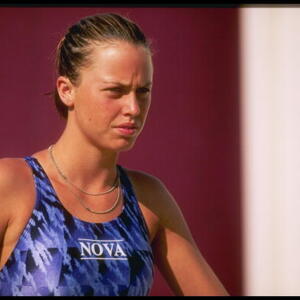