Aly Raisman Net Worth: Aly Raisman is a retired American gymnast who has a net worth of $4 million. Raisman captained the US women's Olympic gymnastics teams in the 2012 Olympics and in the 2016 Olympics. Both of these teams won their respective competitions. Raisman has won a number of Olympic medals over the course of her career, including two silver medals at the 2016 Olympics and a gold for her team's overall performance. In 2012, she won another gold for her team's performance, plus one gold for Floor Exercise and a bronze for Balance Beam.

After retiring, Aly became the second-most dedicated Olympic gymnast in American history behind Shannon Miller. Outside of her Olympic performances, Raisman competed in various World Championships, where she won a number of additional medals. In 2017, Aly Raisman published a memoir entitled "Fierce: How Competing for Myself Changed Everything."

Early Life: Alexandra Rose Raisman was born on May 25th of 1994 in Needham, Massachusetts. Raised in a Jewish household alongside three siblings, Aly was inspired by her mother, a former gymnast, to get into the sport. At just two years of age, Raisman began her gymnastics training. During her childhood, she watched performances of the 1996 "Magnificent Seven" Olympic US women's team on VHS tapes.

After training at Exxcel Gymnastics and Climbing, Aly moved on to Brestyan's American Gymnastics Club. From the age of 15, Aly was sexually abused by the now infamous physician Larry Nassar. She revealed this fact much later in her career. Raisman was already training for the Olympics during her senior year of high school, and she had to complete her senior year through online learning.

Career: Aly Raisman began her career as a professional gymnast in 2009, competing in the American Classic in San Diego. She then competed in the U.S. Classic in Des Moines, Iowa. Also in 2009, Aly competed at the National Championship in Dallas, placing third. Another strong result came during the Junior Pan American Championships in Brazil.

In 2010, Raisman went on to compete at the American Cup in Worcester, Massachusetts, placing second. More strong results came at competitions like City of Jesolo Trophy, the Pacific Rim Championships, and the U.S. Classic in Chicago. After a thirteenth-place finish at the 2010 World Artistic Gymnastics Championships in Rotterdam, Raisman placed third at the American Cup in Jacksonville, Florida.

In 2011, Aly won the U.S. Classic in Chicago. That year, she captained the U.S. team for the first time during the World Artistic Gymnastics Championships in Tokyo. The team won the competition, and she placed fourth individually. During this period, Raisman showed off her trademark tumbling pass for the first time, and she was praised for its originality and its difficulty.

By the end of 2011, Aly decided to become a professional athlete. She abandoned her NCAA eligibility and rejected a scholarship to the University of Florida, choosing instead to sign with Octagon, a sports management firm. She was soon sponsored by Ralph Lauren. Aly's first major competition as a pro came in 2012 wth the American Cup in New York City, where she took second place. She also placed second at the City of Jesolo Trophy. Later that year, Raisman won the U.S. Classic in Chicago, which prompted observers to state that she was now ready to compete in the Olympics.

After placing third at the National Championships in St. Louis and the Olympic Trials in San Jose, Aly was brought onto the US gymnastics team that would compete in the 2012 Summer Olympics. Although Raisman was just 18, she was the oldest member of the team and took the captaincy. This Olympic team earned the nickname "Fierce Five" and won gold that year in London. Individually, Aly won a gold medal for the floor final to the tune of "Hava Nagila." She also won the bronze medal for the balance beam final.

After suffering injury in 2012, Raisman studied at Babson College in Massachusetts before returning to her professional career. In 2014, Aly was allowed to return to the national training camp after completing one year of conditioning, as requested by coach Mihai Brestyan. By the end of the training camp, she had won back her place in the U.S. National Team.

After strong results in various competitions leading up to 2016 (including Gold at the Pacific Rim Championships and a win at the U.S. Classic in Hartford), Raisman became the captain of the U.S. Olympic Team. After an exceptional qualifying run, Raisman and her team won the gold medal once again. This time, the team was dubbed "The Final Five." Individually, Raisman won two silver medals and performed better than she had during 2012. This marked the end of Aly's career as a gymnast.

Media Appearances: Raisman has made a number of media appearances over the years. After the Larry Nassar scandal, Aly appeared in a Maroon 5 music video with a t-shirt that featured the words "always speak your truth." She is also known for appearing in the 16th season of "Dancing With the Stars," and she finished fourth in the competition. In 2012, Aly appeared alongside the rest of the Olympic gymnastics team in an issue of "Sports Illustrated." During this period, she was also the subject of a documentary entitled "Aly Raisman: Quest for Gold."

Abuse Whistle Blowing: In 2017, Raisman revealed that she was one of the many victims who had been sexually abused by Larry Nassar. She was 15 years old when she was first abused by the former Olympic team physician. After reading a statement during Nassar's sentencing in 2018, Aly filed a lawsuit against USA Gymnastics and the USOC. She accused the organizations of not doing enough to stop the ongoing abuse. 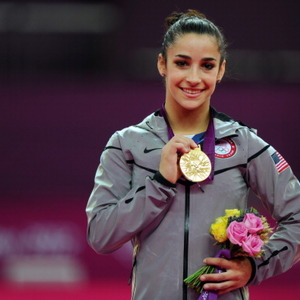