Allison Baver Net Worth: Allison Baver is an American speed skater who has a net worth of $6 million. Allison Baver was born in Reading, Pennsylvania in August 1980. She studied marketing and management at Pennsylvania State University and earned her MBA from New York Institute of Technology. Baver is a short track speed skater who trains and resides in Salt Lake City, Utah. She was ranked #3 overall in the World rankings during the 2005-06 season. She competed in the 2006 Winter Olympics in Turin, Italy. Allison finished seventh in the Women's 500 meter competition. She won her first U.S. National Championship in February 2007. During a 1500 meter race in Sofia, Bulgaria in February 2009 she collided with her teammate Katherine Reutter and ended up fracturing her leg in multiple places. Baver was able to make it back for the 2010 Winter Olympics in Vancouver. She was disqualified in heats for the 1000 meters, did not make it past the semifinals in the 1500 meters, and finished fourth in the 3000 meter relay with her team. The U.S. was awarded the bronze medal because one of the top three teams was disqualified. Allison served as Grand Marshal for Pennsylvania State University in their 2010 Homecoming celebrations. In 2015, she also appeared on the hit Bravo reality series, Millionaire Matchmaker where she worked with matchmaker Patti Stanger to find a healthy and successful relationship. 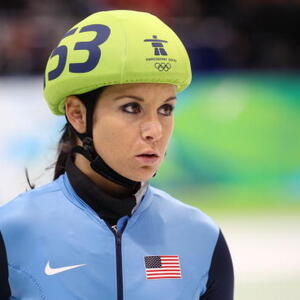