Alina Kabaeva Net Worth: Alina Kabaeva is a Russian politician and retired rhythmic gymnast who has a net worth of $10 million. Alina Kabaeva was born in Tashkent, Uzbek SSR, Soviet Union in May 1983. She is a Russian Honored Master of Sports and served as a State Duma deputy for the United Russia party from 2007 to 2014.

In September 2014 Kabaeva became chairwoman of the board of directors for the National Media Group. She is the most successful rhythmic gymnast from Russia after Evgenia Kanaeva. Kabaeva won 14 world championship medals and 25 European championship medals. She started out in rhythmic gymnastics at three years old. Alina won a Gold medal at the 2004 Athens Olympic Games and a Bronze at the 2000 Sydney Olympic games. She won Golds at the World Championships in 1999, 2003, and 2007. She also won gold medals at the European Championships in 1998, 1999, 2000, 2001, 2002, and 2004. Kabaeva won Golds at the World Cup Finals in 2000, 2003, and 2004, at the Grand Prix Final in 1999, and at the Goodwill Games in 1998. There were rumors that Kabaeva was engaged to Russian President Vladimir Putin. 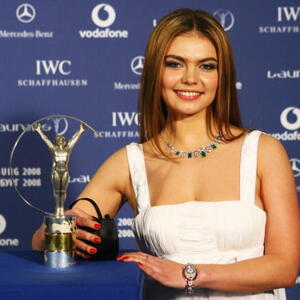