Alicia Sacramone net worth: Alicia Sacramone is a retired American gymnast who has a net worth of $8 million. Alicia Marie Sacramone was born in Boston, Massachusetts in December 1987. She started dancing at five and training in gymnastics at eight years old. Alicia started competing in elite ranks in 2002 and in 2003 she joined the United States national team.

At US National Championships from 2004 to 2008 she won 12 medals including four Golds on vault and two Golds on floor exercise. She also won seven medals including two Golds at World Championships from 2005 to 2007. Sacramone won a team silver medal at the 2008 Beijing Olympics. She won the National Championship on vault in 2010 and another World Title on vault in the 2010 World Championships. She was won 10 World medals, the most of any U.S. gymnast. Alicia married NFL quarterback Brady Quinn in 2014. She graduated from Winchester High School and attended Brown University. She retired in 2009 but made a comeback. After she was not named to the Olympic team in 2012 she suggested that she would likely retire. Alicia and Nastia Liukin became the first female athletes to be CoverGirl spokes models in 2008. She has appeared in a commercial for Gatorade and as a spokeswoman for Team 24 Fitness. 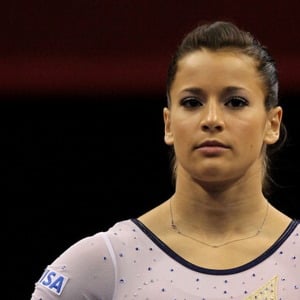