Alain Bernard Net Worth: Alain Bernard is a former French freestyle swimmer who has a net worth of $10 million dollars. Alain Bernard was born May 1, 1983 in Aubagne, France. He is also one of the fastest sprinters in the world in the 50m and 100m distances. Bernard won a total of four medals (two golds, one silver and one bronze) at two Olympic Games (2008 and 2012).

He also won numerous medals at the World Championships (short course and long course) and European Championships (short course and long course). Bernard formerly held the world record for the 50 meters freestyle (long course) and the 100 meters freestyle (long course and short course). Bernard was chosen as the 2008 L'Équipe Champion of Champions(France category) by L'Équipe. He was also chosen as the 2008 RTL Champion of Champions by RTL, a French commercial radio network; this annual sports award was inaugurated in 2008. On January 1, 2013, Bernard was made an Officer (Officier) of the French National Order of Merit. Bernard's rise through the international swimming ranks started as a relay swimmer where he won successive medals-first a gold then two silvers-in the 4x50m freestyle at the European Short Course Championships in Vienna (2004), Trieste (2005) and Helsinki (2006). He also won his first international individual medal when he placed third in the 100m freestyle in Helsinki. In 2007, Bernart continued his medal-winning ways with the French relay team by taking the bronze in the 4x100m freestyle at the World Championships in Melbourne, Australia before picking up his first French titles in 50m and 100m freestyle at the National Championships. 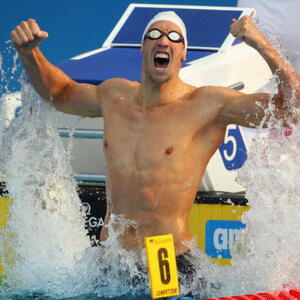