Zach Ertz net worth: Zach Ertz is an American professional football player who has a net worth of $16 million. Zach Ertz was born in Orange County, California in November 1990. He is a tight end who was named All-East Bay Athletic League first team at Danville Monte Vista High School. Ertz played his college football at Stanford University where he was a Unanimous All-American and First-team All-Pac-12 in 2012. He also won the 2011 Orange Bowl, the 2013 Rose Bowl, and the PAC-12 in 2012. Ertz was drafted #35 in the 2013 NFL Draft by the Philadelphia Eagles where he has spent his entire NFL career. In 2016 he signed a five year deal with the Eagles for $42 million. Zach Ertz has been romantically linked to soccer player Julie Johnston. 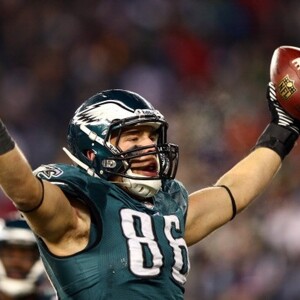