Willie Brown Net Worth: Willie Brown was an American football executive and retired football player and coach who had a net worth of $6 million. He had an illustrious career playing for the Denver Broncos and Oakland Raiders as a cornerback. After retiring as a player, Brown stayed on as an assistant coach with the Raiders. In 1991 he was hired as the head coach at California State University Long Beach. That was the final year before the school's football program was termination.

Brown was inducted into the Professional Football Hall of Fame in 1984.

Willie Brown was born on December 2, 1940. He played football on Grambling State University's team. He was not drafted by an NFL team upon his 1963 graduation. His first contract as a professional was with the American Football League's Houston Oilers. He was unfortunately dropped from the team team while in training camp. Brown next signed on to Denver Broncos, becoming a starter by the middle of his rookie year. By his second season, he had won All-AFL honors and participated in the league's All-Star Game, where he rushed for 144 yards and recorded 9 interceptions. Brown was traded to the Oakland raiders in 1967, where he remained the rest of his playing career. He held the role of defensive captain during 10 of the 12 years he spent with the team, and was named to 4 NFL Pro Bowls and 5 AFL All-Star games in that time. In 1978, Brown retired from the Raiders, ending his career with a tied-for-first-all-time team record of 39 interceptions. 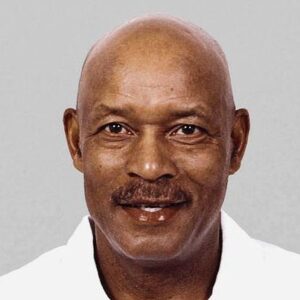