He was named to the second-team All-Big 12 team and was a first-team All-American in 2007 with the Tigers. The Atlanta Falcons selected the strong safety in the second round of the 2009 NFL Draft. He made his professional debut the same year, playing in two games as a rookie. Moore's career took an upswing during his sophomore season as he appeared in all 16 games with the team, tallying 72 tackles, five interceptions, and one forced fumble. He checked in as one of the team's leading tacklers and tied for the most interceptions on the Falcons during the 2010 season. Moore signed a five-year deal to remain in Atlanta in early 2013. As of the end of the 2013 season, Moore has tallied 289 combined tackles, 3.5 sacks, 32 passes defensed, 14 interceptions, and eight forced fumbles. He earned NFL Pro Bowl honors, appearing in the 2013 Pro Bowl along with fellow Falcons free safety Thomas DeCoud. 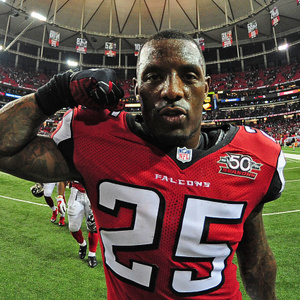