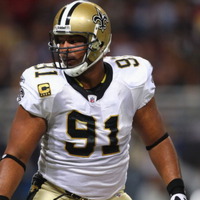 Will Smith (NFL) Net Worth

in Richest Athletes › NFL Players
Will Smith Net Worth:
$13 Million
💰 Compare Will Smith's Net Worth

Will Smith Net Worth: Will Smith was an American professional football player who had a net worth of $13 million. Will Smith was born in Queens, New York, in 1981. He played college football for the Ohio State University Buckeyes before the New Orleans Saints drafted him with the 18th overall pick during the first round of the 2004 NFL Draft. Smith, a six-foot-three, 282-pound defensive end, played every game of his career with the Saints for nearly a decade between 2004 and 2013. In 2014, Smith signed a deal with the New England Patriots, but he was released prior to the start of the season, and he did not suit up for a regular season game with the team. The former first round draft pick went to one Pro Bowl during his career in 2006 and was part of the Saints' victory in Super Bowl XLIV. Through the end of his 2013 season with the Saints, Smith racked up more than 450 tackles to go along with 67.5 quarterback sacks and two interceptions during the duration of his career. Smith has two children with his wife, Racquel Joseph, and a third child from a former flame. Tragically, Will Smith was gunned down during a traffic altercation in New Orleans on April 9, 2016.