Wayne Gandy Net Worth: Wayne Gandy is an American former professional football player who has a net worth of $13 million. Wayne Gandy was born in Haines City, Florida, in 1971. He played college football at Auburn University where he was a first-team All-American and went undefeated with the Tigers during his senior season.

The Los Angeles Rams chose Gandy with the 15th overall pick in the first round of the 1994 NFL Draft. He debuted as a rookie in 1994 and played with the Rams until 1998. The offensive tackle then joined the Pittsburgh Steelers from 1999 until 2002. Gandy signed a six-year deal with the New Orleans Saints and he played for the team from 2003 until 2005. During the spring of 2006, Gandy was shipped to the rival Atlanta Falcons in exchange for a safety and a draft pick in the upcoming draft. He played for Atlanta from 2006 until 2008, including a season as team captain in 2007, and wasn't resigned following the end of the 2008 season. Gandy has not played in the NFL since. The six-foot, five-inch tackle weighed in at 315 pounds. He played in 219 professional games and started in 205 of them. Gandy recovered two fumbles over the course of his career. 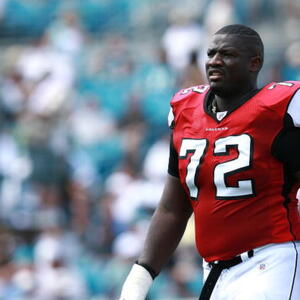