Warrick Dunn Net Worth: Warrick Dunn is a former American professional football player who has a net worth of $11 million. Born in Baton Rouge, Louisiana, in 1975, Warrick Dunn played college football at Florida State University. The five-foot-nine, 187-pound running back earned All-ACC honors three times and was on the second-team All-American squad in 1996.

The Tampa Bay Buccaneers drafted Dunn with the 12th overall pick during the first round of the 1997 NFL Draft. He earned 1997 NFL Offensive Rookie of the Year honors and went to three Pro Bowls in 1997, 2000, and 2005. Dunn earned the 1998 Ed Block Courage Award and the 2004 Walter Payton Man of the Year Award. He was recognized as the Bart Starr Man of the Year in 2008 and joined the 10,000 Rushing Yards Club. Dunn played for the Atlanta Falcons from 2002 until 2007 and returned to the Bucs in 2008. He finished his career with 10,967 yards and 49 rushing touchdowns, averaging 4.1 yards per carry. Dunn organized the Warrick Dunn Charities and the Homes for the Holidays organizations, working with single-parent families trying to buy homes. He later teamed up with several athletes, including Muhammad Ali, Mia Hamm, Cal Ripken Jr., and Lance Armstrong to create the Athletes for Hope organization. He wrote his autobiography, "Running For My Life", in 2008. 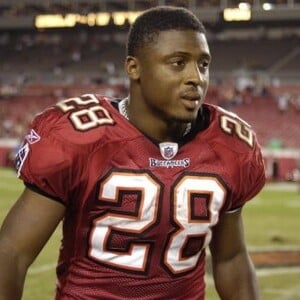