Vinny Testaverde net worth: Vinny Testaverde is an American former professional football player who has a net worth of $10 million dollars. During his career Vinny earned around $14 million in NFL salary, roughly $26 million after adjusting for inflation.

Vinny Testaverde, also known as Vincent Frank Testaverde, was born in Brooklyn, New York, and earned a football scholarship to the University of Miami. At the University of Miami he played exceptionally well, and was a first-team All-American selection, and the winner of the Heisman Trophy his junior year. The Tampa Bay Buccaneers drafted him in 1987 with a six-year $8 million contract, but his first year with the team was dismal. He became the recipient of widespread derision, even as his game improved noticeably. He left Tampa Bay in 1992, and signed with the Cleveland Browns and then the Baltimore Ravens. He began to play consistently well with the Ravens, and led them to the Pro Bowl in 1996. However, it was his successful time with the New York Jets that finally secured his place in history. He then went on to play for the Dallas Cowboys, the Jets again, the Patriots, and the Carolina Panthers, before retiring in 2008. He set multiple records over the course of his 21-year professional career, and was inducted into the College Football Hall of Fame in 2013. 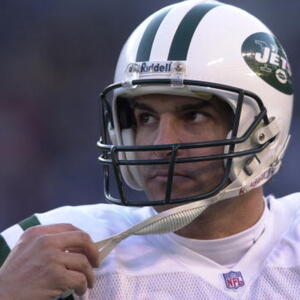