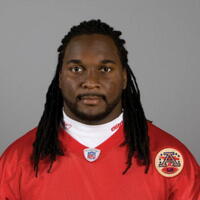 Tyson Jackson net worth: Tyson Jackson is an American professional football player who has a net worth of $30 million. Tyson Jackson has earned his net worth as a defensive end for the Kansas City Chiefs of the National Football League, after being drafted by the Chiefs with the third overall pick in the 2009 NFL Draft. He was born in New Orleans, Louisiana on June 6, 1986. He played college football at Louisiana State University. Jackson attended West St. John High School in Edgard, Louisiana and was a member of the Rams 2003 and 2004 2A State Championship teams. Where he was a two-way lineman, and was named Class 2A Defensive Player of the Year after a senior season. He had an impressive record that totaled 84 tackles, 16 sacks, and 17 pressures, while winning the state championship. Jackson was named All-District and All-Parish on the gridiron and also lettered in basketball. Jackson was considered a three-star recruit by Rivals.com, and he chose LSU over both Oklahoma State and Colorado. Redshirted as a true freshman in 2004 and graduated with a degree in General Studies at LSU. During his college career Jackson played in 53 games with 39 starts at left defensive end at LSU … Produced 122 tackles (55 solo), 27.0 tackles for loss, 18.5 sacks (-92.0 yards), 33 QB pressures, two fumble recoveries, two forced fumbles and 18 passes defended. Jackson signed a contract with the Chiefs on August 10th 2009 the terms of that agreement have not been disclosed. Tyson played in all 16 games of his rookie season and had 38 tackles (27 solo) with 2 pass deflections. Tyson is described as a pphysical performer who plays the defensive end position in Kansas City's 3-4 defensive alignment with fellow first-round defensive end Glenn Dorsey. Jackson should benefit greatly from working with defensive line coach Anthony Pleasant, who enjoyed a 14-year NFL playing career. Tyson Jackson's 2010 salary was $18.2 million. He is currently signed to a 5 year $57 million contract with the Kansas City Chiefs.