Ty Law Net Worth: Ty Law is a former American football player who has a net worth of $28.4 Million. Born Tajuan Law on February 10, 1974, in Aliquippa, Pennsylvania he spent fifteen seasons playing as cornerback in the National Football League (NFL). It was back in high school that Law first showcased his football skills, serving as cornerback, safety, wide receiver and running back.

Excelling in all aspects of the sport, he was named MVP of the school's basketball team. He continued to play college football at the University of Michigan, ending his three year tenure there with 154 Tackles (120 Solo, 34 Assist), 6 INT and 17 PD. In 1995, he was selected 23rd overall by the New England Patriots in the NFL Draft that year. Most of his career, until 2004, he played with the Patriots after which he had brief stints with the New York Jets (twice: 2005, 2008), Kansas City Chiefs (2006-2007), Denver Broncos (2009). In his remarkable NFL career, Ty Law was a two-time All-Pro, a five-time Pro Bowl selection, a Pro Bowl MVP, as well as he won three Super Bowl Championships with the Patriots. As for his 53 career interceptions, they're ranked 22nd all-time. 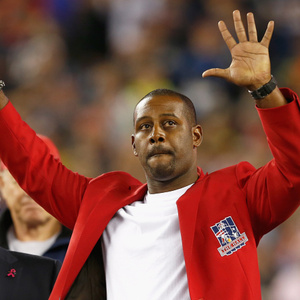