Trindon Holliday played college football at Louisiana State University, where he was one of the fastest players in college football at the return specialist and running back positions. At the 2010 NFL Combine, Trindon Holliday had hoped he could set a record in the 40 yard dash, beating the record mark of 4.24 and during workouts, was clocked at 4.21. However, his official time came in at 4.34. Trindon Holliday was drafted with the 197th overall pick in the sixth round of the 2010 NFL Draft by the Houston Texans. He played for the Texans from 2010 to 2012 and in October 2012 was claimed off waivers by the Denver Broncos. On January 12, 2013 in the Broncos' game against the Baltimore Ravens, Trindon Holliday became the first player in NFL history with a punt return touchdown and a kick return touchdown in the same post-season game. 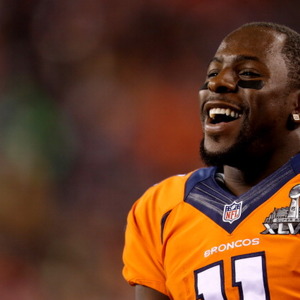