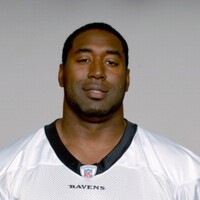 Trevor Pryce Net Worth: Trevor Pryce is a former American football player who has a net worth of $19 Million. Born Trevor Wesley Pryce II on August 3, 1975, in Brooklyn, New York, he served as a defensive end for fourteen seasons in the National Football League (NFL). Initially, Trevor played defensive end for Clemson University, during the 1996 season, before transferring to Clemson University. Then he decided to quit his senior season to enter the NFL Draft in 1997. He was chosen by the Denver Broncos in the first round and he remained with the team until 2006, when Pryce was signed by the Baltimore Ravens as a free agent. 2010 was the last year of his professional career, after which he retired from the sport for good. Trevor's tenure with the Broncos was most prolific as he was four-time Pro-Bowl, three-time All-Pro, as well as two-time Super-Bowl champion. As of 2013, he went on to become a published author with his book AN ARMY OF FROGS, a novel that Trevor Pryce co-authored with Joel Naftali. The book is meant for youths. But this is not the first time for Trevor to dive into writing, since he has also penned several screenplays and even sold two of them, including a children's picture to Sony Films.