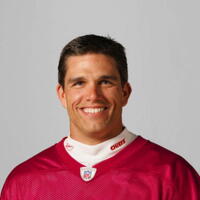 Trent Green Net Worth: Trent Green is a former American professional football player who has a net worth of $12 million. Born in 1970 in Cedar Rapids, Iowa, Trent Green quarterbacked the Indiana Hoosiers during the early '90s. The San Diego Chargers drafted Green with the 222nd overall pick during the 1993 NFL Draft. He sat on the bench during the 1993-1994 season before making his debut in the Canadian Football League with the BC Lions. Green returned to the NFL in 1995 with the Washington Redskins. He played with the St. Louis Rams from 1999 until 2000, the Kansas City Chiefs from 2001 until 2006, the Miami Dolphins in 2007, and the Rams in 2008. Green went to two Pro Bowls during his career in 2003 and 2005 and was part of the Rams' Super Bowl XXXIV-winning team, though Kurt Warner was the starting quarterback after Green endured a season-ending knee injury during the preseason. In 2000, Green earned the Ed Block Courage Award, given to players by other players for their inspiration, courage, and sportsmanship. Green, who retired during the summer of 2009, finished his professional career with 3,740 pass attempts and 2,266 completions, giving him a career 60.6 completion percentage. Green threw 162 touchdowns, 114 interceptions, and threw for 28,475 yards with a passer rating of 86.0. After his retirement, Green took work as an NFL broadcaster and analyst.