Trent Edwards Net Worth and salary: Trent Edwards is a former American professional football player who has a net worth of $3 million dollars. Born October 30, 1983 in Los Gatos, California, Trent Edwards is best known for being the former quarterback for the professional football franchises the Buffalo Bills (2007-2010), Jacksonville Jaguars (2010), Oakland Raiders (2011), Philadelphia Eagles (2012), Chicago Bears (2013) and Oakland Raiders (again in 2014). As a teenager, he participated in the Armenian-American Summer Games in Northern California, an event that was co-founded by Edwards' grandfather, Ben Morjig. Edwards was a highly rated recruit from Los Gatos High School (California) and ranked as the #1 pro-style quarterback by USA Today in 2001. He was recruited by Michigan, Florida, Notre Dame and Tennessee, but chose Stanford, where he proceeded to 'sit out' his freshman year in 2002 to concentrate on his studies. In 2003, he launched his Stanford football career, backing up Chris Lewis. After making an impressive showing as a backup, Edwards started for four games but was sidelined due to injuries. His best year at Stanford was 2005, when he started 11 games and led the team to a 5-6 record. He was drafted by the Buffalo Bills in the 2007 NFL draft (third round). 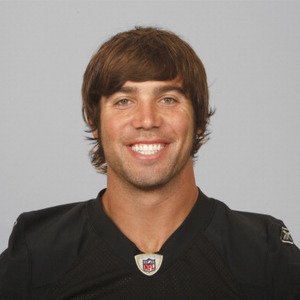