Trent Dilfer Net Worth. Trent Dilfer is an American former football quarterback and current sports analyst who has a net worth of $8 million dollars. Trent Dilfer was born on March 13, 1972 in Santa Cruz, California where he played high school football at Aptos High School and college football for the Fresno State University Bulldogs.

He started at quarterback for Fresno State for two and a half seasons. Dilfer helped Fresno State win or share the conference title for three straight seasons and started in two bowl games. In his junior season, Dilfer led the nation in pass efficiency en route to being named the WAC Offensive Player of the Year. He also set the NCAA record for consecutive pass attempts without an interception (271) that stood until 2007. Dilfer was drafted with the sixth overall pick in the first round of the 1994 NFL Draft by the Tampa Bay Buccaneers. Dilfer became the first Tampa Bay quarterback to ever go to the Pro Bowl. He played six season with Tampa Bay. Dilfer spent the 2000 season with the Baltimore Raven, played for the Seattle Seahawks from 2001 to 2004, spent 2005 with the Cleveland Browns, and finally, played in 2006 and 2007 for the San Francisco 49ers. Dilfer resides with his family in Saratoga, California in the San Francisco Bay Area. He is married to Cassandra Dilfer, a former Fresno State swimmer, and they have three daughters. 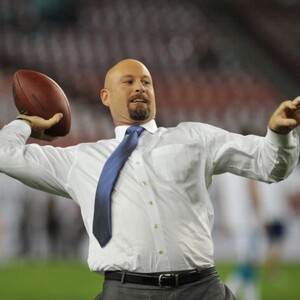