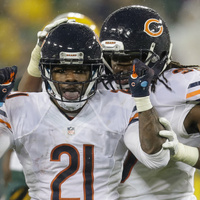 Tracy Porter net worth: Tracy Porter is an American professional football player who has a net worth of $12 million. Tracy Porter was born in Port Allen, Louisiana in August 1986. He is a cornerback who earned first team All-District 3A honors at Port Allen High School. Porter played his college football for Indiana where he was second-team All-Big Ten in 2007. He was drafted #40 overall by the New Orleans Saints in the 2008 NFL Draft. Porter played for New Orleans from 2008 to 2011. He played for the Denver Broncos in 2012, the Oakland Raiders in 2013, and the Washington Redskins in 2014. He also played for the Chicago Bears from 2015 to 2016. Tracy Porter won Super Bowl XLIV with the Saints and was named NBC Madden Player of the Game in 2015. In 2008 he signed a four year deal with the Saints for $4.2 million. Porter signed for one year for $4 million with Denver in 2012 and for one year with Oakland in 2013 for $1.5 million. He signed a two year deal with the Redskins in 2014 for $6.25 million and a three year deal for $12 million in 2016.