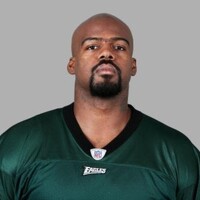 Tra Thomas Net Worth: Tra Thomas is a retired American professional football player who has a net worth of $12 million. Born in 1974 in DeLand, Florida, Tra Thomas played college basketball close to home at Florida State University. The Philadelphia Eagles chose the six-foot-seven, 317-pound offensive tackle with the eleventh overall pick during the first round of the 1998 NFL Draft. Thomas made his pro debut with the Eagles the same year. He played with Philly for a decade, appearing in 166 games and three Pro Bowls in 2001, 2002, and 2004. Thomas was named an All-Pro in 2002 and was part of the Eagles' squad that won the 2004 NFC Championship. He signed a free agent deal with the Jacksonville Jaguars in early 2009 and stayed with the team for one season before he was released in 2010. He landed a second one-year contract with the San Diego Chargers in 2010 before suffering an injury to his knee during training camp. Thomas retired as a member of the Philadelphia Eagles during the summer of 2012 after playing in 174 career games. Thomas began working as a TV analyst for the Eagles' post game programming on Comcast SportsNet Philadelphia in 2011, a year before his retirement.