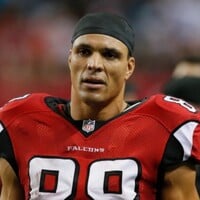 What is Tony Gonzalez's net worth and salary?

Tony Gonzalez is a retired American football player and sports analyst who has a net worth of $50 million. Tony played in the NFL from 1997 to 2013. During his career he made 14 Pro Bowl appearances. Tony Gonzalez played as a tight end with the Kansas City Chiefs and the Atlanta Falcons. Before this, he played college football and basketball at the University of California, Berkeley. Gonzalez holds the NFL record for total receiving yards and receptions by a tight end.

Tony Gonzalez was born in 1976 in Torrance, California, and was raised by his mother Judy. On her side, he is of Jamaican, Cape Verdean, and Scottish descent, while on his father's side, he is of African-American, Euro-American, Native-American, and Argentinian ancestry. As a teenager, Gonzalez went to Huntington Beach High School, where he was on the varsity football and basketball teams. During his senior year, he caught 62 passes for 945 yards and 13 touchdowns, becoming a first-team All-America selection.

After graduating, Gonzalez enrolled at the University of California, Berkeley, where he majored in communications. For the California Golden Bears, he played tight end under future NFL coach Steve Mariucci, and was made an All-America and All-Pac-10 selection. Additionally, Gonzalez continued his basketball career at Berkeley, making it to the Sweet Sixteen of the NCAA Tournament. However, he ultimately chose football as his career sport, forgoing his final year of eligibility in college to declare for the NFL Draft.

Gonzalez kicked off his professional career in 1997 after being drafted by the Kansas City Chiefs. For his rookie season, he finished with 33 receptions and two touchdowns, helping the Chiefs finish with the best record in the American Football Conference. He was consequently named to the NFL All-Rookie Team. For the next season, Gonzalez improved his performance with 59 receptions for 621 yards. Further improvements came in 1999, when he caught 76 passes for 849 yards, and made a career-best 11 touchdown receptions. As a result, he received his first Pro Bowl selection, and was named as a First Team All-Pro. More success and honors followed, including several more Pro Bowl and First Team All-Pro selections. In a game against the San Diego Chargers in 2001, Gonzalez threw his first professional pass; in 2002, he made 63 receptions for 773 receiving yards. For the next three years, he was the NFL's most productive tight end. In 2004, he set an NFL record for a tight end when he caught 102 passes for 1,258 yards and seven touchdowns. That season, he also had a career-best 14 receptions for 144 yards in a game against the Chargers.

Beginning in 2006, Gonzalez started to close in on many team and league records. He ended up breaking Otis Taylor's team record for receiving yards and touchdowns, and passed Priest Holmes for most team yards from scrimmage. Gonzalez finished with 73 receptions for 900 receiving yards, garnering his eighth consecutive Pro Bowl nomination. In late 2007, he broke the career touchdown reception record for tight ends, and passed Shannon Sharpe for most total receptions ever made by a tight end. The next season, Gonzalez became the all-time NFL leader in receiving yards for a tight end with 10,064.

In 2009, Gonzalez was traded to the Atlanta Falcons. Upon catching a touchdown pass during his first regular season game with the team, he became the first tight end in NFL history to notch 11,000 receiving yards. Another major achievement came in November of 2012, when Gonzalez became the only NFL tight end ever to catch 100 career touchdown passes. The following year, he won the only playoff game of his career when the Falcons defeated the Seattle Seahawks.

Despite his intention to retire after the 2013 season, Gonzalez signed a two-year, $14 million contract with the Falcons. Early that season, he made 12 receptions for a career-best 149 receiving yards and two touchdowns. In December, he played his final NFL game, finishing the season with 83 receptions for 859 receiving yards. 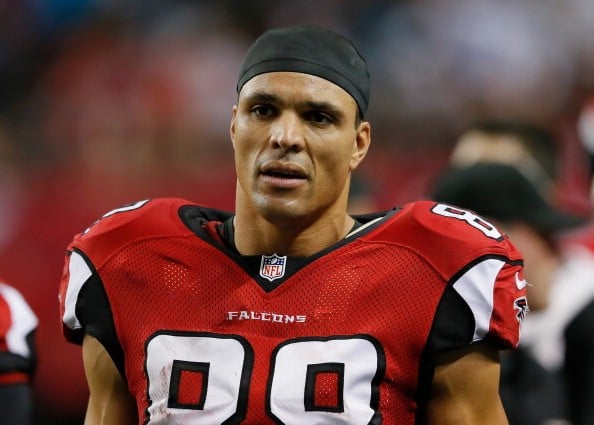 Beyond football, Tony Gonzalez has been involved in various business and media projects. Among them, he cofounded the Kansas City cleaning service Extreme Clean 88, and contributed to the children's charity Shadow Buddies. He is also an ambassador for the Scholars' Hope Foundation, a Huntington Beach nonprofit that helps students advance their educations. In 2009, Gonzalez cofounded All-Pro Science, a sports nutrition company. That year, he co-authored the book "The All-Pro Diet," which details his workout routine and diet.

Tony has an adult son from a relationship with television personality Lauren Sanchez. Lauren was married to talent super-agent Patrick Whitesell for a number of years. Lauren then made world headlines when she was revealed to be the girlfriend of Amazon founder Jeff Bezos.

Tony has been married (through a commitment ceremony – not legal marriage) to October Gonzalez since 2017. They have three children together.

In 2007 Tony paid $5 million for a large mansion in a gated community in Huntington Beach, California, not far from where he grew up. He sold this home in 2015 for $6.3 million. A year later Tony paid $7 million for a home in Beverly Hills, California. He then spent several years and untold millions custom-building a new mansion on the property. In September 2020 Tony listed the 13,000 square-foot home for $30 million. In June 2021 he sold the home for $21 million. Here is a video tour: