Tony Dungy net worth and salary: Tony Dungy is a former American professional football player and coach who has a net worth of $10 million. Tony Dungy earned his net worth as a head coach in the National Football League. He was the head coach from 1996 to 2001 for the Tampa Bay Buccaneers and for the Indianapolis Colts from 2002 to 2008.

Currently he is an analyst on NBC's Football Night in America. He was born in Jackson, Michigan on October 6, 1955, he is married to Lauren Harris and they have two daughters and five sons however in 2005 they lost their 18 year old son James who committed suicide. Tony played college football as a quarterback for the University of Minnesota, in 1976 he signed with the Pittsburgh Steelers of the National Football League. He joined the team as a free agent and he played the position of defensive back, he later played for the San Francisco 49ers, and then finished his career in 1980 in the New York Giants training camp. He was the first head coach of African American descent to win a Super Bowl, as coach of the Colts in Super Bowl XII. In addition to his professional coaching career Dungy is the national spokesman for the All Pro Dad, a fatherhood program of Family First, a national non-profit organization based in Tampa, Florida. 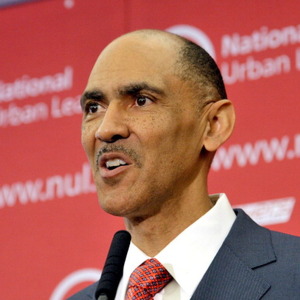