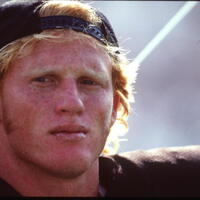 Todd Marinovich was a professional football player for NFL's Los Angeles Raiders, as well as the AFL and the Canadian Football League who has a net worth of $20 thousand. Todd Marinovich has earned his net worth as a quarterback for the L.A. Raiders, Winnipeg Blue Bombers, BC Lions and the L.A. Avengers. In 1992 Marinovich ended his career with the NFL due to his substance abuse problem and after failing his third NFL drug test Marinovich was let go. After his time with the NFL he tried to sign for CFL's Winnipeg Blue Bombers but was injured and unable to play. His drug abuse worsened and he was at that time using heroin. He spent time in more than one jail. In 1999 the Chicago Bears and the San Diego Chargers showed an interest in signing Marinovich but he was unable to pass his physical. That's when he signed, instead, with the BC Lions of the Canadian Football League. His substance abuse became even worse and he decided not to stay with the BC Lions. In 2000 he signed with the AFL, playing for the L.A. Avengers, but this was to be the last team in his career. By 2001 he had been suspended from the team for his unacceptable behavior. Since then he has been in and out of jail, as well as rehab and has had several arrests for possession and use of illegal substances. In 2008, after staying clean for a year Marinovich began lecturing at Newport Coast Recovery, a treatment center for drug and alcohol abuse. Marinovich was born in San Leandro, California in 1969. His father was a lineman and captain for the USC Trojans in 1962. He trained Todd for football through his entire childhood, starting at infancy. Marinovich has a half-brother, Mikhail Marinovich who plays defensive end at Syracuse University. Todd Marinovich and his wife, Alexandria have a son, Baron and a daughter Coski.