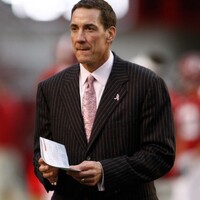 Todd Blackledge Net Worth: Todd Blackledge is an American retired professional football player who has a net worth of $2 million. Todd Blackledge was born in Canton, Ohio in February 1961. He attended Princeton High School in New Jersey and then played football at Penn State University. As a three year starter at quarterback he won a national championship in 1982 and also won the Davey O'Brien Award for best quarterback in the nation. Blackledge was drafted #7 by the Kansas City Chiefs in the 1983 National Football League Draft. He played for the Chiefs from 1983 to 1987 before finishing his NFL career with the Pittsburgh Steelers from 1988 to 1989. After retiring Blackledge went into broadcasting first working as a radio sports talk show host in Ohio. He worked for the Big East Network, Indianapolis Colts, and ESPN. He was a college football analyst for ABC Sports from 1994 to 1998 and then for CBS from 1999 to 2006. He joined ESPN's College Football Primetime in 2006 and has hosted the segment Todd's Taste of the Town. In 2013 he wrote the book Taste of the Town: A Guided Tour of College Football's Best Places to Eat. He has also coached high school basketball and little league.