Tim Tebow Net Worth: Tim Tebow is an American professional football quarterback who has a net worth of $5 million. During his time in the NFL, Tim earned a little under $10 million in total salary. During his time with the Eagles, Tim earned $4.1 million. As an Eagle, he made a grand total of eight passes. In other words, he earned $512,500 PER PASS.

Early Life: Tim Tebow was born on August 14, 1987, in Makati, Philippines. His parents were Baptist missionaries who moved to the Philippines to build their own ministry. When Tim was three years old, the family moved to Jacksonville, Florida. He is the youngest of five children and they were all homeschooled by their parents. Despite not being enrolled, he was allowed to play on the football team of Trinity Christian Academy and later switched to Nease High School. He was named Florida's Player of the Year and led the team to a state title.

Football Career: He enrolled in the University of Florida and Tebow played college football for their team, taking home the Heisman Trophy in 2007 and appearing on BCS National Championship-winning teams during the 2006 and 2008 seasons. Tebow was selected by the Denver Broncos in the first round of the 2010 NFL Draft. As a member of the Denver Broncos, he started the last three games of his rookie season and became the team's full-time starting quarterback beginning in the sixth game of 2011. The Broncos were 1–4 before he became the starter, but began winning with him on the field, often coming from behind late in the fourth quarter, until they won their first AFC West title and first playoff game since 2005, defeating the Pittsburgh Steelers in overtime. Tebow was traded to the New York Jets during the offseason after the Broncos acquired free-agent quarterback Peyton Manning. Tebow received little playing time for the Jets and on April 29, 2013, the Jets released Tebow after drafting quarterback Geno Smith. He signed a two-year, non-guaranteed contract with New England on June 11, 2013, before being cut from the team on August 31, 2013.

During his time with the Broncos, Tebow became known for publicly acknowledging his faith in God by dropping to one knee in a pose that looked much like Auguste Rodin's bronze sculpture "The Thinker" after scoring or making a great play. The genuflecting, signature move was coined "Tebowing" and proceeded to be mimicked throughout the country. The origin of the phrase came from fan Jared Kleinstein, who posted a photo on Facebook of him and all of his friends mimicking the stance. Kleinstein went on to set up a website showing photos submitted by people around the world showing their own version of Tebowing. The site had 20,000 submissions and 20 million page views after just two months. Tebow legally trademarked the name. 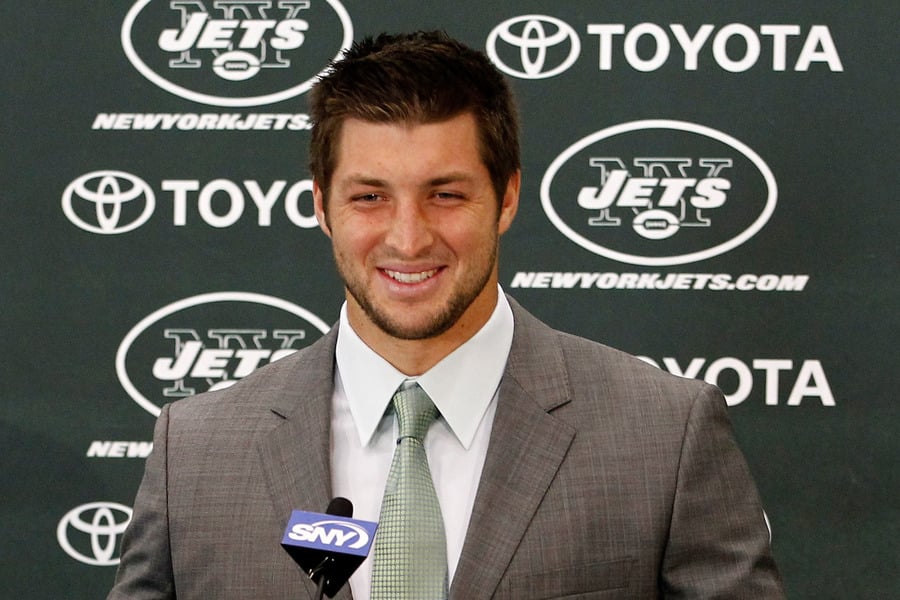 Baseball Career: In early August 2016, Tebow announced that he wanted to pursue a career in pro baseball and invited 30 Major League teams to his open tryout at the end of August. He had not played baseball full-time since his junior year in high school when he was an all-state player.  40 MLB scouts attended and he later participated in the Mets Instructional League. He hit a home run on the first pitch. Tebow was assigned to the Scottsdale Scorpions. In 2018, he was invited to Major League camp with the Mets and they promoted him to their Double-A team. He then was assigned to the Syracuse Mets of the Class AAA International League. Tebow hit three home runs over a six-game stretch but had to miss the remainder of the 2019 season due to a pinky finger injury. Tebow announced in February 2020 that he had accepted an invitation to play for the Philippines national baseball team.

Personal life: Tebow got engaged to Miss Universe and South African model Demi-Leigh Nel-Peters in January 2019. They were married in South Africa on January 20, 2020. Tebow is famous for his outspoken Christian beliefs. He spent summers as a teenager working at his parents' ministry in the Philippines, preaching at schools and villages and assisting with medical care. Tim financially supports 40 national evangelists working in the nation. Tebow has shared his Christian faith by preaching in schools, prisons, and youth groups across America. He is a vocal advocate for faith-based abstinence and is a group leader for the Fellowship of Christian Athletes.

Philanthropy: Tebow created a foundation to give back to others during college. He along with some of his peers at the University of Florida created First and 15, which raised funds for an orphanage that was founded by his father's ministry. Tebow has raised money for Shands Hospital pediatric cancer center in Gainesville and a trip to Disney for disadvantaged children. In January 2010, Tebow launched the Tim Tebow Foundation. The foundation announced plans to build a children's hospital in the Philippines in 2011. The Tebow CURE hospital in Davao City opened in 2014 and specializes in orthopedics. The cost of the project was $3 million and came from donations from CURE and the Tebow Foundation. The foundation also throws Night to Shine, which is an event that holds a prom for disabled teens so they have a safe place to attend prom. Tebow was designated a Great Floridian by Governor Rick Scott for his major contributions to the progress and welfare of Floridians. 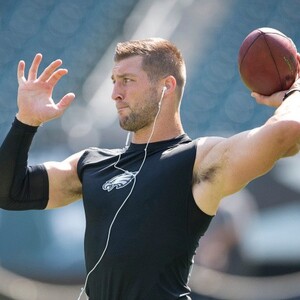