Tim Brown net worth: Tim Brown is an American former professional football player who has a net worth of $8 million. Tim Brown was born in Dallas, Texas in July 1966. Brown was a wide receiver who played at Woodrow Wilson High School. His mother did not want him to play football so he hid it and said he was in the band.

Brown played his college football at the University of Notre Dame. In 1987 he won the Heisman Trophy and Walter Camp Award and was named the Sporting News College Football Player of the Year. Brown was drafted #6 by the Los Angeles Raiders in the 1988 NFL Draft. He played for the Los Angeles/Oakland Raiders from 1988 to 2003 and finished his career with the Tampa Bay Buccaneers in 2004. Brown was selected to the Pro Bowl 9 times and was a second-team All Pro in 1997. He was seven time All-Conference and won an AFC Championship in 2002. He was named to the NFL 1990s All-Decade Team. In 2009 Brown was inducted into the College Football Hall of Fame and named the Walter Camp Alumni of the Year. In 2015 he will be inducted into the Pro Football Hall of Fame. 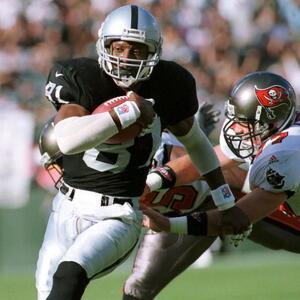