Thurman Thomas net worth: Thurman Thomas is an American former professional football player who has a net worth of $12 million. Thurman Thomas was born in Houston, Texas in May 1966. He was a running back who won a Texas Class 4A State Title and was a USA Today High School All-American playing for Houston Willowridge High School.

Thomas played his college football for Oklahoma State where he was a two time All-American and was later inducted into the College Football Hall of Fame. Thomas was drafted #40 by the Buffalo Bills in the 1988 NFL Draft. He played for the Bills from 1988 to 1999 and finished his career with the Miami Dolphins in 2000. During his NFL career Thomas was a five time Pro Bowl selection and won four AFC championships. He was named the NFL MVP in 1991 and the NFL Offensive Player of the Year in 1992. Thomas is a member of the 10,000 Rushing Yards Club and is the Buffalo Bills All-Time Leader in rushing touchdowns, rushing yards, and rush attempts. He was inducted into the Pro Football Hall of Fame in 2007 and is also included in the Buffalo Bills Wall of Fame and the Texas Sports Hall of Fame. 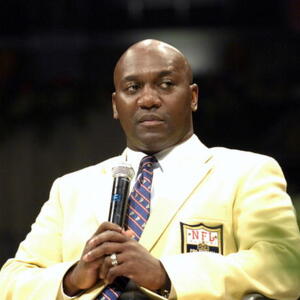