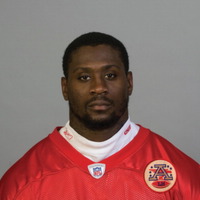 Thomas Jones Net Worth: Thomas Jones is a former American professional football player who has a net worth of $12 million. Thomas Jones was born in Big Stone Gap, Virginia, in 1978. The five-foot-ten, 215-pound running back played college football at the University of Virginia in Charlottesville. The Arizona Cardinals chose Jones with seventh overall pick during the first round of the 2000 NFL Draft. He made his rookie debut the same year, and played with the Cardinals until he was traded to the Tampa Bay Buccaneers in 2003. He later signed a deal with the Chicago Bears in 2004, where he played until 2006. Jones then played with the New York Jets from 2007 until 2009 and the Kansas City Chiefs from 2010 until 2011. Jones earned Pro Bowl honors in 2008, the same year he led the AFC in rushing. He was part of the NFC championship-winning team with the Chicago Bears in 2006 and joined the 10,000 Rushing Club. Jones has rushed for 10,591 career yards with 68 rushing touchdowns and a four-yards per carry average. Jones, who is among the best rushers in history, plans to donate his brain to the Sports Legacy Institute after his death to help better understand the connection between football and potential head trauma.