Terrelle Pryor was born in Jeannette, Pennsylvania on June 20, 1989. Terrelle excelled at athletics as a child. He led his high school basketball team to its first championship in 20 years. He also became the first football player in Pennsylvania's history to run for 4,000 yards and throw for 4,000 yards. He won multiple honors during his high school years, including being named Pennsylvania Player of the Year twice, and being chosen as the MVP of the U.S. Army All-American Bowl.

He was heavily recruited by various colleges, but eventually announced that he would attend Ohio State University. At Ohio State he set a record for touchdown throws for a freshman quarterback during his second game. He steadily improved over the course of the next two years. He was suspended in late 2010, along with four other teammates for selling signed memorabilia. In May of 2011, Ohio State became embroiled in a scandal involving football players being given special benefits. Mr. Pryor withdrew from the school in June of 2011, and was subsequently drafted by the Oakland Raiders.

He played for the Raiders until 2013 and then jumped to several teams on short-term contracts. Terelle spent time with the Seahawks, Chiefs, Bengals, Browns, Redskins, Jets, Bills and Jaguars.

Contracts: Before leaving for the Redskins, Terrelle turned down a four-year $30 million extension from the Browns. He instead signed a one-year $6 million deal with the Redskins. He hoped to put up impressive numbers in that one-year deal and then sign a massive deal. Unfortunately his performance in that last contract season was just mediocre. Had this turned out well, he would have been in-line for a 4-year $60 million deal. He ended up only receiving $4 million from the Redskins after missing out on a $2 million performance bonus. After that season, he signed mediocre one-off deals. For example, the Bills paid him just $900,000 for the 2019-2020 season. He was placed on injured-reserve in August 2019.

Stabbing Incident: On November 29, 2019, Terrelle Pryor was stabbed in his Pittsburgh apartment. 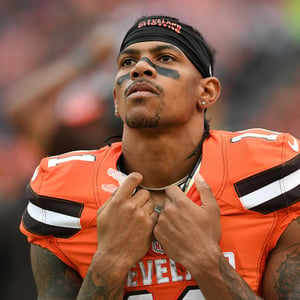