Terrell Suggs Net Worth and salary: Terrell Suggs is an American football outside linebacker, and defensive end, for the Baltimore Ravens who has a net worth of $22 million dollars. Terrell Suggs was born October 11, 1982 in Minneapolis, Minnesota and moved to Phoenix, Arizona after eighth grade. He played high school football at Chandler High School and Hamilton High School where he set the Arizona Class 5A record for rushing yards in a game with 367 as a junior in 1999.As a senior, Suggs was named a Parade high school All-American in 2000 and Gatorade Arizona Player of the Year, among other awards. Suggs attended Arizona State University, where he played defensive end from 2000 to 2002. He finished his career with 163 tackles, including a school, career-record 65.5 tackles for losses, and 44 sacks, 14 forced fumbles, three fumble recoveries, two interceptions, and nine passes deflected. He set an NCAA single-season record with 24 sacks in 2002. Suggs was drafted by the Baltimore Ravens with the 10th overall pick in the first round of the 2003 NFL Draft, becoming, at the time, one of the youngest defensive players ever drafted at only 20 years old. He has been a six time selection to the Pro Bowl and was a part of the Ravens team that won Super Bowl XLVII. 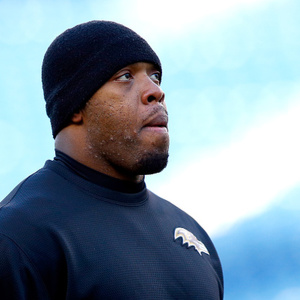