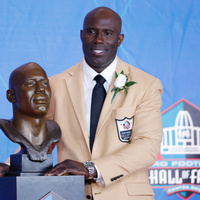 Terrell Davis Net Worth: Terrell Davis is an American retired professional football player who has a net worth of $10 million. Terrell Davis was born in San Diego, California in October 1972. He first played fullback in his senior year at Lincoln High School. He also set the school record in the discus throw on the track team. Davis played for Long Beach State University before transferring to the University of Georgia. He was selected in the 6th round of the 1995 NFL Draft by the Denver Broncos. Davis played his entire career for the Broncos from 1995 to 2001. During his career he won two Super Bowl Championships with the Broncos. He was a three time Pro Bowl selection as well as a three time First-team All-Pro. He was the NFL Offensive Player of the Year in 1996 and 1998 and the NFL MVP in 1996. Davis was also the Super Bowl MVP of Super Bowl XXXII and a three time AFC rushing leader from 1996 to 1998. He was selected to the NFL 1990s All-Decade Team and the Denver Broncos 50th Anniversary Team. Davis is part of the Single Season 2,000 Rushing Yards Club. He has been inducted into the Colorado Sports Hall of Fame and the Denver Broncos Ring of Fame. Since retiring form the game he has worked as a football analyst.