Ted Washington Net Worth: Ted Washington is a former American professional football player who has a net worth of $11 million. Born in Tampa, Florida, in 1968, Ted Washington played college football for the University of Louisville cardinals. The San Francisco 49ers drafted Washington with the 25th overall pick during the first round of the 1991 NFL Draft.

Washington played with the Niners for two seasons before joining the Denver Broncos in 1994. He went on to play for the Buffalo Bills from 1995 until 2000, the Chicago Bears from 2001 until 2002, the New England Patriots in 2003, the Oakland Raiders from 2004 until 2005, and, finally, the Cleveland Browns from 2006 until 2007. Washington, a six-foot-five, 375-pound nose tackle, appeared in four Pro Bowls during his career (1997, 1998, 2000, 2001) and earned All-Pro honors three times (1997, 1998, 2001). Washington won one Super Bowl during his career, Super Bowl XXXVIII in Houston, Texas, where the New England Patriots knocked off the Carolina Panthers, 32-29 in 2004. Washington, who earned the nicknames "Mount Washington" and "Washington Monument" for his size and stature, finished his pro playing career with 603 tackles, 34.5 quarterback sacks, and two interceptions. He played in the league until he was 39 years old. Washington has five children with his wife and lives in North Carolina. 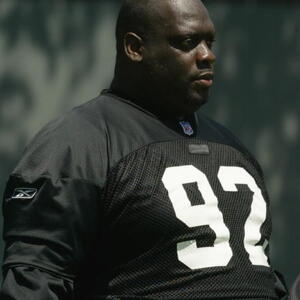