Ted Ginn Net Worth and salary: Ted Ginn is an American professional football wide receiver and return specialist who has a net worth of $13 million. Tedd Ginn, Jr. was born in 1985 in Cleveland, Ohio where he played high school football at Glenville High School where his father, Ted Ginn, Sr., was coach.

Ted Ginn played defensive back, quarterback, and wide receiver in high school as was named the 2004 USAToday Defensive Player of the Year, a Parade All-American, and was invited to play in the U.S. Army All-American Bowl, where he was the Most Valuable Player of the game. Ted Ginn played college football at Ohio State University where he was recruited to be a defensive back, but ended up playing wide receiver for the Buckeyes. Ted Ginn had 125 receptions for 1,943 yards and 15 touchdowns in 37 games during his Ohio State career. Ted Ginn was selected as the ninth overall pick in the first round of the 2007 NFL Draft but the Miami Dolphins. Ted Ginn played for the Miami Dolphins from 2007-2009 wher, the San Francisco 49ers from 2010-2012, where he was a member of the NFC Champion team; and is currently a member of the Carolina Panthers team. 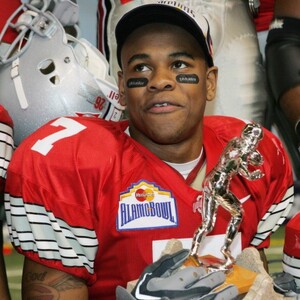