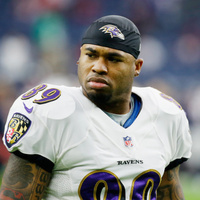 Steve Smith net worth: Steve Smith is an American professional football player who plays wide receiver for the Carolina Panthers of the National Football League and who has a net worth of $10 million. Steve Smith was born in Carlsbad, California in 1979 and attended Los Angeles' University High school where he lettered in football as well as track and field and set a number of school and city records. After graduating from high school in 1979, Smith attended 2 year college Santa Monica College where he was a teammate of future professional football player Chad "Ocho Cinco" Johnson. After Santa Monica, Steve Smith transferred to the University of Utah to play for the Utes. Steve Smith played for the Carolina Panthers from 2001-2013. He has played for the Ravens ever since. He was chosen in the 3rd round of the 2001 NFL draft with the 74th overall pick. Steve Smith is the Panthers' all-time leader in receptions, receiving yards, and touchdowns. Steve Smith became the 35th player in NFL history to rack up 10,000 receiving yards in 2011. Steve Smith has been a five time Pro Bowl selection in 2001, 2005, 2006, 2008, and 2011 as well as a three time All-Pro selection in 2001, 2005, and 2008. Steve Smith and his wife Angie have three children.