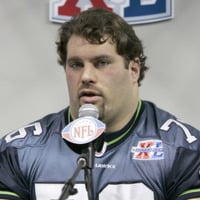 Steve Hutchinson Net Worth: Steve Hutchinson is a former American football player who has a net worth of $12 Million. Born Steven J. Hutchinson on November 1, 1977, in Fort Lauderdale, Florida he spent twelve seasons playing as a guard in National Football League (NFL). While studying at the University of Michigan he played on the Michigan Wolverines football team, where he was named an All-American. The Seattle Seahawks selected him in the first round of the 2001 NFL Draft, and he had remained with the team until 2005. Steve Hutchinson also played for the Minnesota Vikings and Tennessee Titans. He was a seven-time Pro Bowl selection, as well as seven-time All-Pro. After Hutchinson announced his retirement on March 11, 2013 he spends the most of his time with his family, his wife Landyn and their two children.