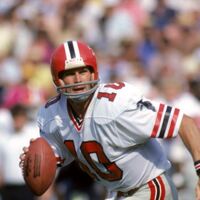 Steve Bartkowski net worth: Steve Bartkowski is an American former professional football player who has a net worth of $1.5 million. He is best known for his time as the quarterback of the Atlanta Falcons.

Steve Bartkowski was born in Des Moines, Iowa in November 1952. He was a quarterback who played at Santa Clara Buchser High School. Bartkowski played his college football at California where he was a consensus All-American in 1974. He was drafted #1 overall by the Atlanta Falcons in the 1975 NFL Draft and played for the Falcons from 1975 to 1985 before playing for the Los Angeles Rams in 1986. Steve Bartkowski was the NFL Offensive Rookie of the Year in 1975 and the NFC Rookie of the Year as well. He was a Pro Bowl selection in 1980 and 1981. Bartkowski was the NFL passing touchdowns leader in 1980 and the NFL passer rating leader in 1983. He has been inducted into the Atlanta Falcons Ring of Honor and had his #10 retired by the Atlanta Falcons. He is also a member of the College Football Hall of Fame. He went on to serve on the Falcons Board of Directors.