Sidney Rice Net Worth: Sidney Rice is an American retired football wide receiver who has a net worth of $25 million. Born September 1, 1986 in Gaffney, South Carolina, he graduated from Gaffney High School in 2004 and was named All-State in football and basketball, leading the basketball team to consecutive state titles and the football team to a state championship.

During his high school career, he was named to the High School Sports Report Statewide All-State team and selected as Offensive Player of the Year. Rice was heavily recruited by many colleges and ultimately chose the University of South Carolina, where he played 2004 to 2006. Rice was drafted in the 2nd round (44th overall) of the 2007 NFL Draft by the Minnesota Vikings and signed on with the Vikings that same year. Rice suffered a hip injury in the 2009-10 season's NFC championship game against the New Orleans Saints and was supposed to have surgery in the off-season during the spring to repair it, but did not go through with it out of fear fearing that the surgery would affect his performance. In 2010, just three weeks into the next season's training camp, Rice decided to go through with the surgery and was unable to play until again November 2010. Rice agreed to a five-year, $41 million contract with the Seattle Seahawks in 2011, where he was reunited with offensive coordinator Darrell Bevell and quarterback Tarvaris Jackson. Rice was placed on injured reserve on November 30, 2011. February of 2014, the Seahawks released Rice, but he subsequently agreed to re-sign with Seahawks for a one-year contract on April 16, 2014. July 23, 2014, Rice announced he was retiring due to multiple concussions throughout his career. Rice currently holds the NFL record for most touchdown receptions in a playoff game. 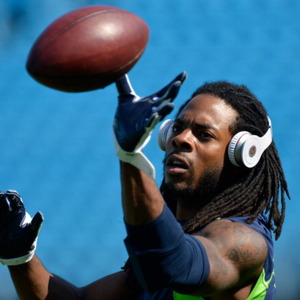