Shaun Alexander net worth: Shaun Alexander is an American former professional football player who has a net worth of $15 million dollars. Shaun Alexander was born in Florence, Kentucky, and was an excellent athlete in multiple sports, including basketball and baseball. He was an All-American selection by multiple publications his senior year, and was named Kentucky's "Mr. Football". He then went on to play for the University of Alabama. The Seattle Seahawks drafted him in 2000, and he spent the next seven years with the team. He was highly successful while with the Seahawks, and was a three-time Pro Bowl selection and a two-time All-Pro selection. He was also the NFC Rushing leader in 2004, and the NFL Rushing leader in 2005. He was named the AP NFL Offensive Player of the Year in 2005, and at one point, held the record for the most single-handed touchdowns in a single season, with 27. He spent the 2008 season with the Washington Redskins, but was plagued by injuries, and they subsequently released him. He has not officially retired. 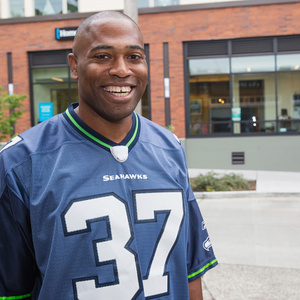