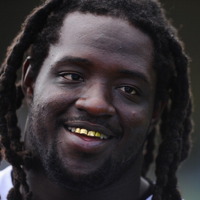 Sen'Derrick Marks Net Worth: Sen'Derrick Marks is an American professional football player who has a net worth of $1.5 million. Sen'Derrick Marks was born in Mobile, Alabama in February 1987. Marks is a defensive tackle who played his high school football for Vigor High School in Prichard, Alabama. He was highly successful while playing for Auburn University. As a freshman Marks was selected to the Coaches Freshman All-SEC Team, Rivals.com First-Team Freshman All-American, The Sports News SEC All-Freshman Team, and The Sports News Freshman All-America Third Team. He was also named to the Athlon Sports Preseason All-SEC Second Team, Playboy Preseason All-America, Lindy's Preseason First Team All-American, and Blue Ribbon College Football Yearbook Preseason All-SEC Team. Marks was an Outland Trophy candidate and won the Mark Dorminey Defensive MVP Award in 2008. He was drafted #62 by the Tennessee Titans in the 2009 NFL Draft. Marks played for the Titans from 2009 to 2012 and was signed by the Jacksonville Jaguars in 2013.