Sam Bradford Net Worth and salary: Sam Bradford is a retired American football player who has a net worth of $70 million. During his NFL career Sam earned $130 million in salary alone. Bradford played from 2010-2018, for multiple NFL teams.

Early Life: Samuel Jacob "Sam" Bradford was born on November 8, 1987, in Oklahoma City, Oklahoma. Born to Kent and Martha Bradford in Oklahoma City, Bradford attended Putnam City North High School (also located in Oklahoma City). There, Bradford was a local star when it came to football, basketball, baseball, not to mention golf for his Putnam City North Panther High School. Bradford earned accolades as a pitcher on the baseball field but ended up pursuing football. Bradford would earn All-City honors as a junior quarterback in a highly competitive market. Following Bradford's senior season, a season during which Bradford threw for 2,029 yards and 17 touchdowns in 12 games, Bradford was selected for the Oklahoma Coaches Association All-State Team and also earned accolades as a Second-Team All-State selection by The Oklahoman.

College Career: Bradford earned an athletic scholarship in order to attend the University of Oklahoma. There, Bradford played under coach Bob Stoops for the Oklahoma Sooners football team.

Bradford was redshirted as a freshman during the 2006 season. During this same season, Oklahoma's then-starting quarterback Rhett Bomar, was dismissed due to a violation of NCAA rules. This occurrence left a significant void at the quarterback position for Oklahoma. On August 21, 2007, Bradford earned the starting quarterback role for the 2007 Sooner team.

Bradford would end up helping the Sooners win the Big 12 Championship — the team defeated Missouri for the second time in one season. The Sooners advanced and played the West Virginia Mountaineers for the Fiesta Bowl, which took place on January 2, 2008. The Sooners lost 48–28.

Bradford would go on to face Florida (a team led by Tim Tebow) during the 2009 BCS National Championship Game. Bradford performed well, throwing 26 passes out of 41 attempts for 256 yards. Bradford recorded two touchdowns and two interceptions during his performance, which resulted in a Florida victory (24–14).

NFL Career: Bradford made an announcement in 2010 after undergoing season-ending shoulder surgery that he would enter the 2010 NFL Draft. Bradford would commence his professional NFL career after being picked 1st overall during the 2010 NFL Draft. He was selected by the St. Louis Rams.

During Bradford's first season in the NFL he set a league record for most completions by a rookie. Earning this accolade helped Bradford earn NFL Offensive Rookie of the Year honors. Bradford made significant contributions to the St. Louis Rams, Philadelphia Eagles, Minnesota Vikings, and Arizona Cardinal offensive efforts from 2010 to 2018.

Contracts and Career Earnings: In 2010 Sam Bradford signed the richest NFL contract ever which included a record $50 million in guaranteed money. By the time he officially retired, Sam Bradford had earned more than $130 million in salary alone during his time in the NFL. He earned $65 million just from playing for the Rams from 2010 – 2014. Between June 2017 and June 2018, Sam Bradford earned $24 million from salary and endorsements. He is one of the 25 highest-earning players in NFL history.

During his career Sam played a grand total of 83 games. At $130 million in salary, that works out to $1.56 million per game played. At Arizona he earned $5 million per game (he only played three games). Some other fun Bradford career earnings stats include:

Personal Life: Bradford identifies as a citizen of the Cherokee Nation and has traced his lineage through the federal government's Dawes Rolls. Bradford happens to be the first member of the Cherokee Nation to ever start at the quarterback position for a Division I university since Sonny Sixkiller, a quarterback who played for the University of Washington (1970–1972). Bradford's father, Kent Bradford, earned accolades as an offensive lineman for the Sooners (1977-1978) and perhaps had no short amount of influence in Bradford's prowess on the gridiron as well.

Bradford is also an avid ice hockey fan and enthusiast. Bradford's favorite team is the Vancouver Canucks. Bradford spends his time now as a scratch golfer and also acts as a representative for Christianity, appearing in short films and video testimonials which share his faith about Christianity. In 2009, Bradford was honored by Oklahoma City mayor Mick Cornett by declaring January 13 as "Sam Bradford Day", a holiday celebrated in Oklahoma City. 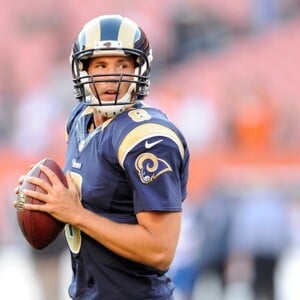