Ryan Leaf is a former American football player who was a quarterback in the National Football League (NFL) for four seasons and has a net worth of $1 thousand. After a successful college career at Washington State University, Ryan Leaf was the second overall pick at the 1998 NFL draft. He was chosen right after Peyton Manning.

The Chargers signed Leaf to a four-year contract worth $31.25 million, including a guaranteed $11.25 million signing bonus. San Diego's high hopes for Leaf were soon dashed, as his rookie season was marked by bad performances. He skipped a symposium that was mandatory for all players who were drafted, resulting in a fine. He had a bad relationship with the media and his teammates. He missed his entire second season due to a shoulder injury uncovered in a pre-season physical. He started the first two games of the 2000 season, completing less than half of his pass attempts and throwing for five interceptions and one touchdown. After being waived by San Diego in March, 2001, he was picked up by the Tampa Bay Buccaneers, who were intrigued by his physical talent and planned to develop his abilities more slowly by having him watch and learn.

Injuries on the field resulted in eight surgeries in 15 years, leading to an addiction to prescription painkillers. He was sentenced to prison for felony burglary and drug possession in 2012.

Early Life and College Career: Ryan Leaf was born in 1976 in Great Falls, Montana. As a teen, he attended Charles M. Russell High School, which he led to the 1992 Montana state title. After his graduation, Leaf accepted a scholarship at Washington State University, where he became a quarterback under head coach Mike Price. Over his college career, he played in 32 games for Washington State, and started 24 of them. During his junior year, he averaged around 330 yards passing per game, and threw for an incredible 33 touchdowns, at the time a Pacific-10 Conference record. Moreover, Leaf led Washington State to its first Pac-10 championship in school history. Due to his success, Leaf was a finalist for the Heisman Trophy, coming in third behind Charles Woodson and Peyton Manning. He was also named Pac-10 Offensive Player of the Year. Leaf subsequently chose to forgo his senior year to enter the 1998 NFL draft.

San Diego Chargers: In the much-contested draft, where Leaf and Peyton Manning were neck-and-neck as the two best players available, Leaf was drafted second by the San Diego Chargers. The team signed him to a four-year, $31.25 million contract that included a guaranteed $11.25 million signing bonus, the largest ever paid to a rookie at that time. From the start, Leaf proved to be trouble for the team due to his bad behavior. He skipped the final day of a mandatory draftee symposium, incurring a $10,000 fine. Although Leaf led the Chargers to victory during its first two games of the season, a viral infection, several fumbles, and a locker room altercation with a newspaper reporter only brought him negative attention. He finished the season with 1,289 passing yards and a 45.3% completion percentage, giving him an awful quarterback rating of 39.0.

The 1999 season wasn't any better for Leaf, as he suffered a shoulder injury and underwent a surgery that caused him to miss the season. Additionally, he got into a shouting match with a coach, resulting in a fine and a suspension without pay. During his suspension, Leaf was caught playing flag football in a park, which violated his contract. Things began to look up in 2000, when Leaf led the Chargers to a victory over the Arizona Cardinals. However, only losses followed, as did further injuries that hobbled his playing. Despite Leaf's 71-yard touchdown pass to Jeff Graham in the final game of the season, the Chargers still lost. Leaf finished his third season with a 50% completion percentage for 1,883 yards and 11 touchdowns. Due to the Chargers' abysmal 1-15 record for the season, the team released Leaf in 2001.

Tampa Bay Buccaneers and Dallas Cowboys: Only two days after his departure from the Chargers, Leaf was claimed by the Tampa Bay Buccaneers. However, his wrist injury had still not healed, and after a substandard preseason, he was asked to accept a demotion to fourth quarterback status with a lower salary. After he refused, Leaf was released from the Buccaneers five days before the start of the season.

Leaf attempted a comeback with the Dallas Cowboys, but ran into trouble again when he failed his first physical. He got a second chance when regular starter Quincy Carter suffered an injury, leading the Cowboys to sign Leaf again. However, after only four games, all of them losses, Leaf was once again released. 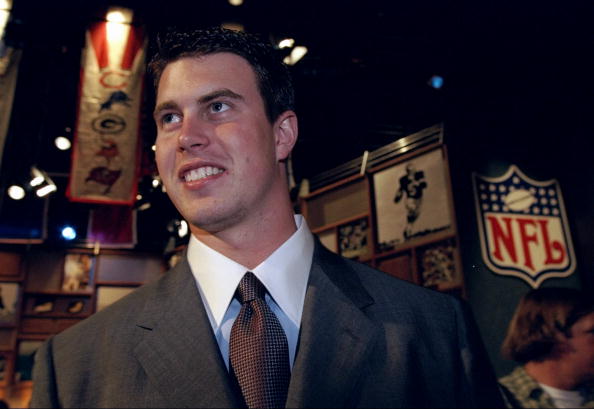 Seattle Seahawks and Retirement: Another chance at a comeback came with the Seattle Seahawks, which signed Leaf to a one-year contract. Although he attended the team's spring minicamps, he abruptly and with no explanation retired in 2002 at the age of 26. Over his brief NFL career, Leaf appeared in 25 games, and completed 317 of 655 passes for 3,666 yards and 14 touchdowns. He finished with a poor career quarterback rating of 50.

Leaf's playing legacy has since become one of great notoriety. ESPN ranked him number one on its list of the 25 biggest sports flops between 1979 and 2004. In 2010, NFL Network ranked him the greatest NFL quarterback bust of all time.

Post-Playing Career: Following his retirement from the NFL, Leaf returned to San Diego to become a financial consultant. Subsequently, in 2004, he resumed his education at Washington State, graduating with a BA in humanities. In 2006, he joined West Texas A&M University as a volunteer quarterback coach. Two years later, he was put on indefinite leave after he allegedly asked a player for painkillers, to which he had long been addicted. Leaf then resigned from his position.

In 2009, Leaf briefly worked as a business development manager for a travel company in Vancouver. The next year, he started writing a regular football column for the website Cougfan.com, and signed a contract to write three memoirs with Crimson Oak Publishing. Since 2018, Leaf has worked as a program ambassador for Transcend Recovery Community, a group of sober living houses with locations in Los Angeles, Houston, and New York. Additionally, Leaf has a radio show and does college football analysis for the Pac-12 Network.

Leaf was indicted on burglary and controlled substance charges in Texas in 2009. The next year, he pled guilty to seven counts, and was sentenced to ten years of probation with a $20,000 fine. In 2012, Leaf got into more hot water when he was arrested on burglary, theft, and drug charges in Montana. Four days after this, he was arrested again on burglary, theft, and drug possession charges. Leaf was sentenced to seven years in custody, with two years suspended if he abided by the judge's conditions. 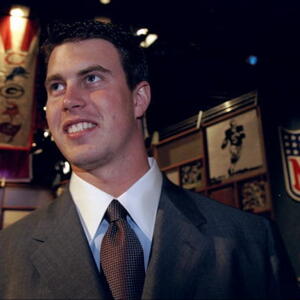